PW › Blog › The richest animals in the world

The richest animals in the world

We live boringly... whereas in the USA a dog can become a mayor, and in Norway - a general. It looks all funny and banned, but I never shared such jokes, mockery of society and animals. Probably, people do not cope with their duties, since animals more and more often "try on" human professions and do quite well with work that is unusual for animals. This post compiled a selection of unique animals in "human positions". 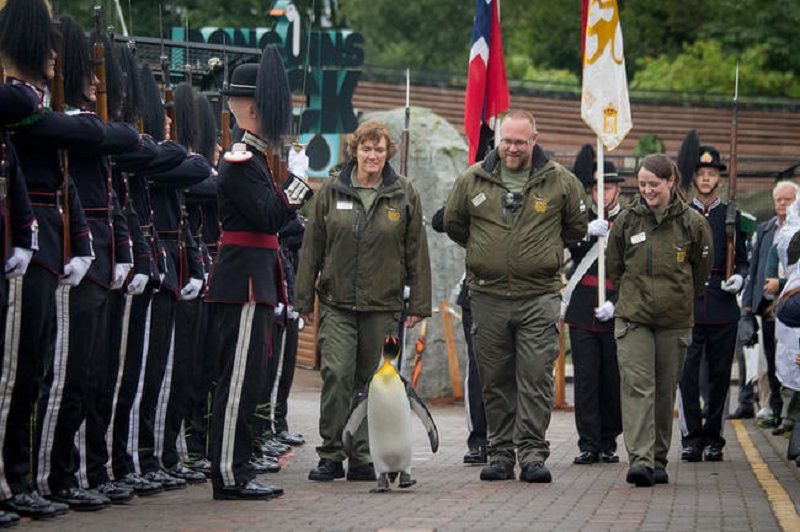 On 22 August, a king penguin from Edinburgh Zoo, Scotland, became Brigadier General of the Royal Guard of Norway. The title was awarded to the bird at a ceremony in Edinburgh. The penguin's name is Nils Olaf. The ceremony was attended by over 50 Norwegian Guardsmen who arrived for the Royal Edinburgh Military Band Parade. The guardsmen saluted Niels Olaf, and he strictly examined the formation. The bird even has its own epaulette. Prior to his promotion, Nils Olaf was an honorary colonel of the guard and its mascot. In addition, in 2008 he was knighted. By the way, this is not the first penguin in the service. The first Niels Ulaf died in 1987 after becoming a sergeant in the guard. Soon a second Nils Olaf was elected, and then he was replaced by a third. Moreover, each subsequent penguin began service in the same rank that his predecessor had at the time of death. This is what allowed the current Niels Olaf to rise to the rank of brigadier general and become the highest-ranking bird in the world.

Residents of Cormoranta (Minnesota), with a population of about 1000 residents, elected a dog named Duke for the third time as mayor of the city. The second term of the dog, the Pyrenean Mountain breed, was coming to an end. Therefore, the townspeople re-elected him again. According to the owner of the dog, the Duke won the elections for the first time in 2014. It happened quite by accident. Then 12 people voted for him.

Perhaps it is animal actors that are the most familiar of the unusual professions in animals. How many of them appear in commercials and feature films, some are invited many times and they become truly top artists. For example, during his 26 years of life, a male killer whale named Keiko starred in several major films, the most famous of which were three films from the Free Willy series. At the end of a rather long acting career, the animal was returned to the native waters of Iceland, after which Keiko settled near the coast of Norway and lived there under the supervision of local scientists. Alas, the killer whale was never able to adapt to the wild and died a year later.

During the European Football Championship in 2008, the amazing octopus Paul began to predict the results of the matches of the German national team. The accuracy of his predictions at that time was 80%. The mollusk unmistakably determined the outcome of four of the five meetings of the German national team. But at the World Cup, held in South Africa in 2010, Paul has already accurately predicted the outcome of all matches of the German team. There are other known cases when our smaller brothers were engaged in predictive, giving forecasts of certain sporting events, but this was one of the most striking.

In 2008, the Japanese government introduced a new government post - a Tourism Goodwill Ambassador. And they decided to appoint a famous painted cat named Halloween Kitty. Hello Kitty's main activities are concentrated in China and Hong Kong. On her behalf, a Chinese-language travel blog is being run on the Internet. This character differs from the general list of this rating, but the case is very interesting, so I decided to add for a change.

The most famous animal artist is the Congo chimpanzee. The cost of paintings by this master varies from 900 to 8500 thousand dollars. The creativity of the Congo was discovered by the British zoologist Desmond Morris and immediately offered the chimpanzee a pencil and a piece of paper. Soon, the monkey learned to draw circles, and after a couple of years he was already masterfully wielding a brush. Among the admirers of the Congo were such masters as Pablo Picasso and Joan Miró.

Not only in the twenty-first century, people are trying to attach animals to different professions. Of course, one cannot but recall such a heroine of space exploration as the dog Laika. Having passed the way from a stray dog ​​to an astronaut, Laika became one of the first living beings to orbit the Earth. Its return was not provided for by the design of the spacecraft, so the dog died from overheating during the flight 5-7 hours after the launch. True, it was assumed that she would live in orbit for at least a week. Neither her name, nor her feat, nor her sacrifice will ever be forgotten by science.

I learned about these ravens from the Posner program, who, due to the first channel, traveled around Europe and told, showed and shared. The population of six ravens has been living within the walls of the Tower of London for quite a long time and has great symbolic significance for the whole of England. Back in the days of King Charles II (17th century), it was believed that the Tower itself and the entire British monarchy would collapse without ravens. Since then, the birds have held the honorary title of guardians of the famous fortress and even receive a salary of 100 pounds a month. In addition, each individual has its own name. So, at the moment, Branwen, Baldrick, Gwillum, Munin, Thor and Hugin are valiantly serving within the walls of the Tower. All names are taken from Scandinavian mythology.

As you can see, those pets and wild animals are doing pretty well. I doubt they read any business ebooks to get there... however, they are probably much happier then their human colleagues are.